Configuring the roles that players can have on a team Print

The default roles that a player can have on a team are "Organiser", "Regular" and "Stand in", but these roles are configurable so you can add or remove whichever roles suit your organisation.  For example, you might want to create a "Treasurer" role so you can easily see which player is responsible for the finances on a team, or a "Coach" role to represent a person who's responsible for the team but who does not necessarily play in fixtures for that team.  You can create whatever roles you like, and this article explains how to do so. 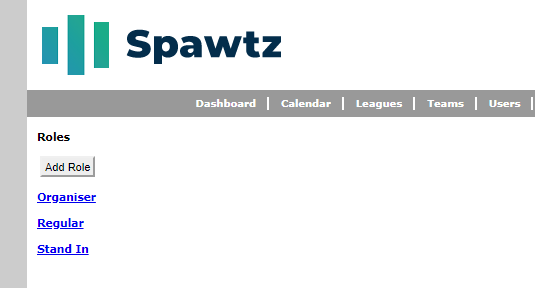 To add a new role, click "Add Role", or to modify the things that an existing role can do, click on the link for the existing role.

When you click on a role, you will be presented with this screen:

The name and description of the role are configurable in the top section: 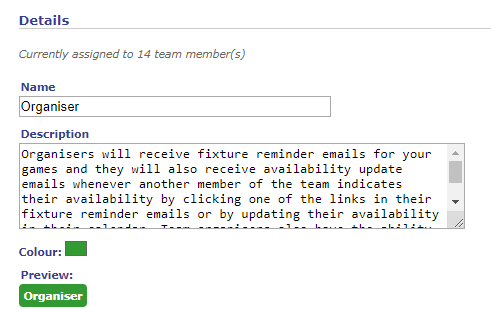 This section also shows how many team members this role is currently applied to, and also allows you to customise the colour that the role will appear in if it is configured to be one of the roles that appear in the quick lookup and team organiser popups:

The permissions that this role has on the team are displayed in the "Permissions" section: 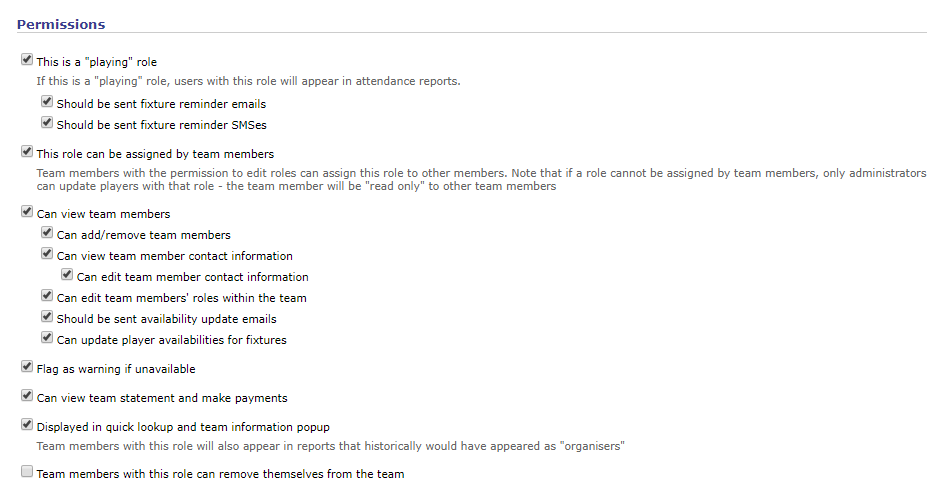 The permissions are relatively self explanatory, and where they are not, there are further descriptions below each of them that describe their function.

Below this section are all the functions that you can perform on this role.

If you set the role as the "default" role, it will be the role that is applied to team members that are created via the scoreboard application or the live scoring application or other processes where an explicit role is not specified.

Before you can delete a team role, there mustn't be any team members who have that role on there team.  Therefore, there is a function that allows you to convert all the team members with one particular role to another role:

Finally, assuming there are no team members that have a particular role, you can delete that role.

Similarly, the warning flag will be displayed against fixtures where any member of the team is unavailable when their role has the "Flag as warning if unavailable" permission.

We have added a new function to the system (which is not available by default) whereby roles with the appropriate permission can remove themselves from a team.  Users with that permission will now see the following button next to the teams in their profile:

This button will allow players to remove themselves from the team.  By default this permission is not applied to any of the roles in the system, but you can choose to add it if you wish to allow people to leave a team without having to involve their team organiser or an administrator.